Barbara Wootton, Baroness Wootton of Abinger (1897-1988), was a woman of piercing intelligence and extraordinary commitment to both social science and evidence-informed public policy. Her role in the development of sociology in Britain and worldwide has tended to fade from the institutional memory of the discipline, despite being the most magnificent example of how sociology can shape both understanding of social systems and public welfare on the practical level.

Born and educated at a time before sociology had any serious academic status, Barbara Wootton rightly pointed out in the 1950s that all sociologists had ‘come in from somewhere else’. She herself trained as an economist, worked with William Beveridge on economic policy, wrote an incisive and highly modern critique of neo-classical economics, and put her untrained sociological perspective to excellent use in a book much studied by students of economics, Social Foundations of Wage Policy (1955). This begins with the famously entertaining comparison of her own salary as a university professor with that of the elephant who gave rides to children at Whipsnade Zoo. Her Testament for Social Science (1950) outlined a case for social science which dismissed both grand theory and selective empiricism as useful strategies for studying social problems. She disliked, and indeed defied, all disciplinary labels, insisting that these were unhelpful to what much later would come to be called ‘joined-up’ thinking about social policy. In 1946 she was appointed professor of social studies at Bedford College, where she founded the country’s first social research unit and, funded by a sizeable grant from the Nuffield Foundation, undertook the research for what is probably her best-known work, Social Science and Social Pathology (1959) This controversial magnum opus reviewed existing research to examine the contribution social science had made to the understanding of anti-social behaviour. It was rooted in her own experience as a magistrate – she became one at the age of 28 before, as a woman, she was allowed to vote – and as a magistrate she was appalled to discover that most of her peers just did what they fancied in deciding sentencing strategies. There were simply no guidelines about the best way to prevent reoffending. Her devastating conclusions, that the field was dominated by prejudice, value-judgements, and an unwarrantable disregard for verifiable data, upset many ‘experts’ and did much to illuminate the path that would later be followed by social scientists who shared her interests in helping policy-makers design and implement effective and appropriate social policies.

Crime and its treatment was one of her abiding concerns. When she entered the House of Lords in 1958, she became known as ‘the crime expert’. She chaired two governmental investigations into penal policy, on drugs and alternatives to prison. The resulting ‘Wootton’ Reports both had major impact, the first (in 1968) for its careful (but media-hysteria-provoking) review of the evidence on the effects of cannabis, and the second (in 1970) for its invention of Community Service Orders as a more appropriate, effective and cheaper treatment for many minor crimes than prison. Her engagement with these issues spanned, not just research reviews and practical suggestions, but confrontations with traditional legal theorists about matters of ethics, intention and responsibility. One well-known criminologist likened Wootton to an ‘intellectual helicopter’ who sprayed defoliants over multiple academic fields. Her defoliating enterprises are reflected in the many campaigns and organisations she championed: she was a founder member of the Campaign for Nuclear Disarmament, the British Humanist Association, the Pedestrians’ Association (cars were a major cause of injury and death she insisted, in yet another move that was ahead of its time); she was the first chair of the Countryside Commission and of course a founder member of the British Sociological Association and its first female President. Her stunning list of firsts as a woman included being the first woman to give University lectures in Cambridge (in 1921), the first female member of a national policy commission (in 1924), the first female delegate to a League of Nations conference (in 1927), and the first female life peer in the House of Lords and its first woman Deputy Speaker (in 1965). She treated her parliamentary work with enormous seriousness, giving a total of 1,792 speeches over her 30 years in the House, and achieving major successes, particularly the abolition of corporal punishment in schools and moving the abolition of capital punishment onto the statute book in 1965. Her role as a public intellectual included being a governor of the BBC and serving on other royal commissions and committees concerned with workmen’s compensation, the press, the civil service, national debt and taxation, shop hours and the criminal courts. She published 16 books, including two works of fiction and an absorbing (albeit partial) autobiography, and many hundreds of articles in diverse places.

I found researching Barbara Wootton’s life totally fascinating and also extremely exhausting: she did so much for social science and public policy, remaining active well into her eighties. It was hard to find a publisher for my biography of her – many publishers objected that no-one had heard of her. That was, of course, the whole point of writing the biography. It is necessary to rehabilitate and celebrate the life and work of a woman who deserves to be seen as one of the leading social scientists of the twentieth century. 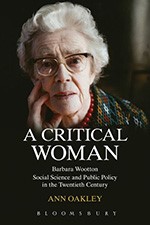 See Ann Oakley A Critical Women: Barbara Wootton, social science and public policy in the twentieth century. London: Bloomsbury Academic, 2011, and the website I created that records her life and work: http://www.barbarawootton.co.uk