By Amy Chandler, University of Edinburgh 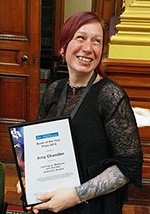 Self-injury – or self-harm – is increasingly known about, named, and discussed. News stories frequently frame this in dramatic language, referring to an ‘epidemic’ or ‘startling rise’ in incidence, usually focusing on self-harming bodies which are female, young, and white. Explanations for self-injury circulate – it is a ‘coping mechanism’, a ‘cry for help’, it is ‘secret’, occasionally ‘attention-seeking’. Self-injury is an enduringly fascinating topic, a fascination that is driven in part by the contradictory nature of attempts to fix the meaning of the practice – it seems that everyone knows why people self-injure, yet simultaneously struggle to understand how anyone could ‘do that to themselves’.

In my research, ongoing since 2005, I have continued to grapple with the complex ways in which self-injury is accounted for by different groups of people, primarily those who have themselves self-injured. My approach refuses to accept explanations such as those noted above at face value – whilst maintaining an interest in why some of these explanations appear easier to accept than others; why some – such as ‘attention seeking’ – endure despite the term being associated with considerable critique and disquiet.

Several of these explanations are critically explored in my book, Self-Injury, Medicine and Society; as well as in three earlier papers (published in Sociology 46 (3); Sociology of Health and Illness 35(5); and BMJ Medical Humanities 40(2)). Drawing on a narrative informed analysis of accounts of people who have self-injured, I examine the underpinning assumptions about bodies and emotions that enable, for instance, an understanding of self-injury as ‘transforming’ emotional pain into physical pain. In my first paper (Chandler 2012), I examined the centrality of ‘rationality’ to otherwise ‘emotional’ explanations for self-injury. Using Frith and Kitzinger’s (1998) suggestion that ‘emotion work’ be viewed as a narrative resource as much as a practical accomplishment, I argued that accounts which posit self-injury as a ‘coping mechanism’ work to position the teller as ultimately a fairly ‘rational’ actor – an approach which works to defend against alternative interpretations of self-injury as pathological and irrational.

In my current research I am pursuing two related projects. One of these is a collaboration with Zoi Simopoulou, an arts therapist who holds a PhD in Counselling and Psychotherapy. Funded by the British Academy, and the Carnegie Trust for the Universities of Scotland, we are piloting arts-based workshops as a method of researching meanings of self-harm. The other, funded by a University of Edinburgh/Wellcome Trust ISSF Grant, is laying the groundwork for a new programme of research on culture, society and suicide across Scotland. In the initial stages of this project I am working with Sarah Jeavons Wright, a postdoctoral researcher who specialises in ethnographic approaches to health research.

Dr Chandler won the 2018 Foundation for Sociology of Health and Illness Book Prize for her book, Self-Injury, Medicine and Society: Authentic Bodies (Palgrave Macmillan, 2016). This was announced at the 2018 BSA MedSoc Conference Dinner on Thursday, 13 September.